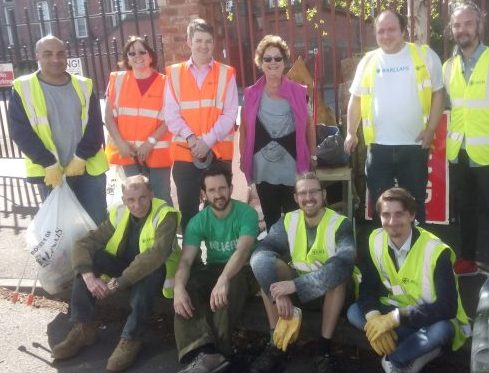 Our political landscape is badly dominated by the big parties – which does a huge disservice to the wide range of people and views in our society. The Green Party’s a smaller party, offering people a positive alternative to the same-old. (Click here for more on the Greens.)

But at a local/council level, it’s a different story. Our votes in local elections (like the one on Thursday 6th May this year, 2021) make zero difference to the national picture – and all the difference to our communities.

Here in Hunslet and Riverside (formerly City and Hunslet), we’ve had Labour councillors for a very long time. And Leeds City Council itself is controlled by Labour, and has been for the vast majority of the past 50 years. There are some great people in Labour (many of them vote for us, locally!) – and there are some great Labour councillors, many of whom we work with.

But we (the Greens) got sick of our area being utterly dominated by just one party – represented in the main by councillors who live far away, who are disengaged from our communities. So, as well as year-round community work, we’ve run active local campaigns these last few years. And thanks to the amazing support of a wide range of local people, we’ve done well, polling in 2nd place each election since 2015, with a fast-growing vote share (most recently up to 43%, at the last election). We are the opposition, the alternative around here: no other parties are even putting up a fight.

So, here in Hunslet and Riverside, we have an opportunity – especially this year (2021), with people so fed up of the big old parties. We’ve been stifled by one-party politics for too long. Support us this May, help us break through the same-old system that’s let us down for too long, and vote for a new start. Thank you!

* Labour are currently trying to confuse and scare people into voting ‘tactically’ for them “to beat the Tories” – but that’s utter nonsense in these local elections, in Hunslet and Riverside. The Tories / Conservatives are nowhere locally, and stand zero chance of winning.

* Related to that, people seem to worry that voting Green is a ‘wasted vote’. NO!!! Here in Hunslet and Riverside, we’ve come a strong 2nd in all of the last local elections, we are the opposition here, and we are fighting for every single precious vote that could help us win a seat here. Please support us, and you can help us create change here. Thank you!

* Finally, if you’ve 4-5 minutes, click here for a long post I wrote about so-called ‘wasted votes’ following the General Election. It’s mainly relevant to national elections, but also explores the reality of smaller parties, tactical voting – and how, we’d suggest, votes for smaller parties are actually more useful to them than the bigger parties in any election.

(Image: Ed and other Greens helped organise a community clear-up in Beeston Hill – and are here pictured with community members, and (shock!) some folk from Labour. There are some good ‘uns in Labour, we very happily work with them – but we’re fed up of councillors who live faraway, and are utterly failing to deliver.)