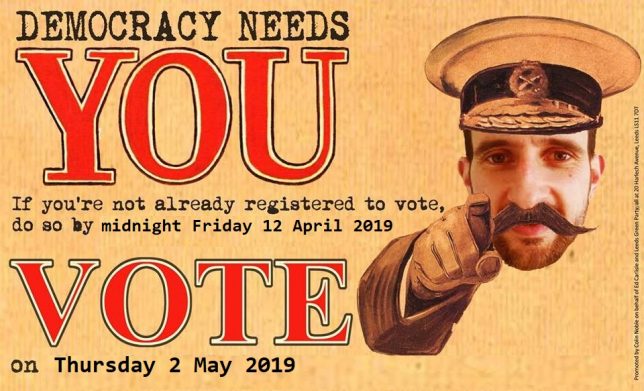 (Graphic from one of our previous voter registration pushes!)

Local politics doesn’t get the same limelight as the national, but it makes a big difference in the lives of our local communities. Ed has since 2015 been standing in the local/council elections, as the Green Party, for the ‘ward’ (zone) called ‘Hunslet and Riverside’ – formerly known as ‘City and Hunslet’*.

These elections happen nearly every year, to choose (each year, on rotation) one of our THREE city councillors to represent our area in the Civic Hall, and to work with residents on local issues.

(*Ed also stood in the 2017 and 2019 General/Parliamentary Elections for the wider area of Leeds Central.)

WHERE/WHAT IS HUNSLET AND RIVERSIDE?

The council ward of ‘Hunslet and Riverside’ was formerly called ‘City and Hunslet’ – but was far too big, so got rejigged in 2018. The main difference is that we lost most but not all of the city centre, and Holbeck ‘Urban Village’.

The ward is made up of the following neighbourhoods:

Then it gets a bit fiddly! As mentioned, we’ve lost large swathes of the city centre, compared to the previous ‘City and Hunslet’ ward. But the following areas are still ‘ours’:

If in any doubt as to which ward you’re in, get in touch, and we’ll sort you out.

At local/council elections, most people 18 or over can vote, including: all British, EU, and Commonwealth citizens who are permanently resident here. Overseas UK citizens can vote, but must register specially to do so. You must be over 18 on the day of the election to vote (although the Greens are campaign for the voting age to come down to 16). For more info on all this, click here. And you MUST be registered on the electoral register to vote…

ARE YOU REGISTERED TO VOTE?

If not, you won’t be able to vote in either this election, or any future elections or referendums. So please consider doing so NOW – and if you’re not sure, do it again, because they won’t register you twice. It takes about 3-4 minutes online – click here! (Having your National Insurance number to hand will help.) The deadline to register ahead of any given election is THREE WEEKS beforehand. (But why wait until the last minute?? Do it now!)

You can also register to vote by post (click here to find out more, or get in touch for help). In that case, you’ll get your polling card + full instructions in the post two weeks before the election – then you’ll need to post your vote or drop it into Leeds Town Hall (or some of the polling stations take them too) by 10pm on election day.

The next local election is due on Thursday 6th May 2021. Put the date in your diary! Polling stations will be open between 7am and 10pm. We will list them all on here beforehand.

You’ll be sent a polling card in the post telling you which polling station to go to – but note that you DON’T need you polling card to vote. Just pitch up and give them your name and address.

You’ll then be given a voting slip. It will have a list of names on it, including Ed Carlisle’s, with a Green Party logo next to it – if you think we merit your vote!

The votes will be counted in the following 2 days after the election, and the results will be announced then (on Saturday 7th May 2021).