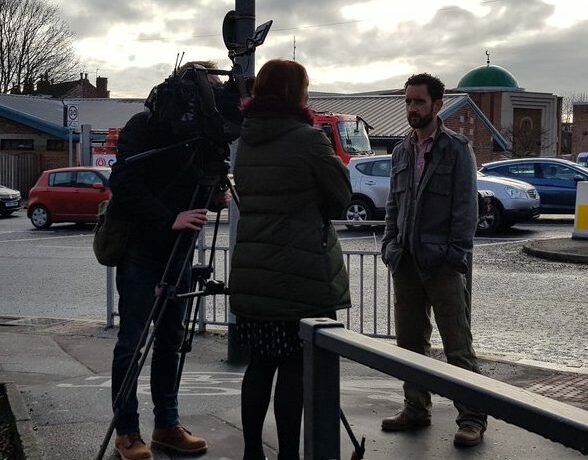 To give a fuller sense of who Ed is, and the work he’s involved in, here are some news articles and more featuring him. Ed genuinely doesn’t like all this self-promotion malarkey, but it seems to goes with the territory if you throw yourself into the political sphere..!

– The Big Bike Fix project got a lot of coverage during 2020, and was featured here on BBC Look North amongst other places.

– It was a bit daft, but Ed accidentally got loads of coverage for transporting a bathtub from Preston back to Leeds, on the train: click here!

– Ed’s been co-leading the Clean Air campaign for south Leeds since 2018. Click here to watch his five-minute deputation speech to the Council in November 2018 (fast forward to 28 minutes, 20 seconds). We were also in Leeds Live (here), the YEP (here), and Look North (pictured above).

– Ed coordinated the creation of a big community igloo in 2018, and got featured in the YEP here (and they also made this quirky video).

– Ed’s campaign (with Leeds Civic Trust) for a plaque to mark the life and tragic death of Leeds man George Edwin Ellison at the very end of World War One also garnered lots of interest, including Look North, Leeds Live (click here), and a load of other places.

– The nice people at Made in Leeds TV have had Ed on their current affairs programmes a few times, talking about community events and issues in south Leeds, regional devolution, and more.

– We’ve had lots of coverage on the Holbeck viaduct project these last few years, like this YEP piece, and quite a bit of stuff on Leeds Live (eg this, and this).

– Between 2014-2016, Ed helped lead on the major Den Building Festival, which got a fair bit of coverage – eg this article, in the YEP.

– Ed’s written for Leeds City Magazine (formerly City Dweller) a bit over the years – eg this blog for them, on ‘Politics: A Reboot?’, and this one on revitalising local politics.

– Ed does a fair bit of writing for South Leeds Life. Click here to see some of his articles over the years. (Some of them have been hard-hitting, eg features on homelessness and tyre fires; others have promoted campaigns like Buy Leeds and the cladding crisis; and others have been a bit of fun, eg the independence movement in the tiny Millshaw community, and the proposal to introduce a metric term system into Leeds schools.

– Following the London bombings in 2005 and even up to now, Beeston Hill (where Ed lives, and which makes up part of the Hunslet and Riverside ward) has had a load of media attention about those events. Here’s a short radio interview from several years back, with Ed and a good mate of his talking about their experience of (and love for) life in the community here.

– And here’s a video clip of Ed doing one of the presentations at a Bettakultcha event at the Belgrave in town, on political disruption. And here’s another older one, in Beeston Hill, talking about ‘alternative economics’.